week 1 of ALIVE: Move -
success!
we had 8 sweet little girls come this week and have their first dance class with Ashley.
they were so sweet!
i love it.
i love that God not only gives us gifts -
but gives us other people who can help us learn to USE them,
and opportunities to try them out.

and i love that the very thing that brings us so much joy -
is the same thing He's calling us to use to worship Him,
for His glory.

amazing right?
so pray for these classes that God will continue to show up for these sweet little girls who are learning what it means to use their dance to worship God.


-ALIVE
Posted by Jillian Cross at 9:00 AM No comments:

you never know til you try

this past week we gathered in the dungeon to do some arting.
we got a little inspiration and, taking a picture of Jesus' face from the internet -
decided to try a little project.

Austin sketched out the drawing on a piece of canvas...
and we found every black marker in the dungeon...
and put on chris tomlin's new album...
then had everyone just start writing the names/ descriptions of God out...

and with some instruction and guidance from Austin,
and the team being willing to try something new -
we ended with this :) 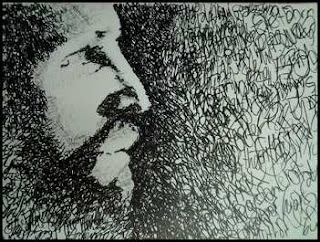 i've heard so many people say they can't do art or they don't know how...
but then i've seen some of those same people be a part of making something like this.

we may not all be naturally gifted to the extent where everything we touch is a masterpiece (although we love those people...right?  ;) )
but we were created in the image of the most creative One of all.
and i really believe that we should all be using our imagination,
being intentional about trying new things,
about getting past what is comfortable for us,
and seeing what God might want to do with/ for/ through us.

obviously this is just a piece of artwork -
but it was such a fun time working together and seeing a final product that turned out so good in such a short amount of time.
and how can spending time thinking on and writing down how good God is in so many ways be bad?

-ALIVE
Posted by Jillian Cross at 8:00 AM No comments:

when we take time for Him

this past weekend i went to a conference for ladies of ALL ages called Empower.
the key speaker was Susie Larson.
and it was amazing.
God showed up and just tore through us, and it was AMAZING.

one of the things that stood out so much and was SUCH an incredible encouragement to me -
was the way she talked about God.
like He is her best friend.
like she talks to Him on a daily basis.
like she KNOWS Him well.
like He's with her in everything.

i know some of that doesn't sound super groundbreaking -
but i noticed it...
and then realized how much i have MISSED having that in my life lately.
i have not been as diligent in making time to just sit with God.
to LISTEN.
to just soak Him in and really focus on Him.
and i notice it.

prayer is a powerful powerful thing.
it brings us to God's feet,
it causes us to look at HIM - not at everything else.
being in His presence is more powerful and overwhelming than any drug or high you could ever have.
its amazing how consuming and beautiful it is to really meet with God...

and its incredible how easy it is to push off that time for something that somehow seems better in the moment.

we have an enemy that doesn't want us to have that time...
why?
because it AFFECTS us.
it brings us closer to God.

so lets not forget to make time for Him.
journal your thoughts, speak your prayers out loud, write them down, paint them -
ask God for help, lift up someone else, tell Him how amazing He is, thank Him -
just whatever comes to mind.
just be there with Him :)

He's always there...
let's not waste that or miss anything He has for us!


-ALIVE
Posted by Jillian Cross at 8:00 AM No comments:

every year we have an ALIVE christmas party.
this year -
some of us wore our festive sweaters.
we had some cookies and candy.
we shared our highlight from our christmases.
and we gave gifts... white elephant gifts to be exact. 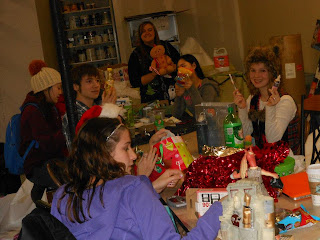 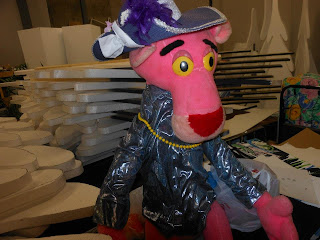 and as an added bonus - i gave everyone these GREAT lollipops...
that taste great AND you get to look like the Abominable Snowman or Rudolph. 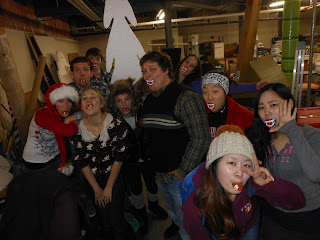 and then we took a few minutes to think about the past year.
to think about all the things that happened - good/ bad/ crazy/ unexpected...
and just think about how God is using it all.
or - if we have no idea, to ask God to have His hand on it all.
its so amazing that He is so personal, so involved and so sovereign over EVERYTHING.
its something we can't comprehend -
but we can be so so so grateful for.
grateful that God has given us unique gifts and unique experiences -
and that He works in each and every one of us.

and its so easy to just live life and let things happen -
but i think its so good to take a second and remember that none of it is random.
that none of it goes unseen by God.
and how amazing it is to watch it all unfold - His plan, His story.

i am truly blessed to work with this group of people.
truly blessed to learn from them, to be creative with them, to pray with them and watch God challenge them.
i am humbled that God would put me here -
and while i don't understand it...
i don't want to waste it.

-ALIVE
Posted by Jillian Cross at 11:00 AM No comments:

Maybe not the proverbs you're thinking of :)

My good friend Clayton is part of an improv team and this is an awesome game that they play...
Everyone sits in a circle, and you go around the circle and each person says one word that makes up one single proverb.

And then when (as a group) you feel the proverb is complete, raise your pointer finger in the air and say in unison "Ahhhhhhhh!"

So... sounds dumb and simple

But... in actuality its probably the best thing in the world.

The idea is to go as fast as you can and just say the very first thing that pops into your head and not really think at all. One of the basic concepts of improv! Building off of the last person to speak in a spontaneous thinking-on-your-feet way!

Here were some of the best ones of the night, with some captions!
(You will start to see patters of words that people like to use... and notice that the shorter ones seem to be the best!)

- Llamas love hats and Jamaica People when they go to the bathroom.

- Coats sometimes are hairy if llamas were made by coats. (Llama sighting #1)

- Chairs could have babies if they broke legs.

- Cucumbers are dressed up with Earth's cucumbers because Earths cucumbers ranch.

- Trees are eating green life out of the can.

- Pineapples are prickly because pumpkins disguised friendship into pineapples.

- Phones call people when donkeys are singing carols around hats.

- Doors open when life jumps them out of windows. (Windows sighting #1)

- Hammers pound with tails and Gangam style friendship. (Probably one of the best everrr...)

- Potatoes can jump around windows when they're hyper because they want to eat people.

- Whiteboards clear off children after they're mistakes are killed by evil because evil is something children hate.

- Killing is not a sad decision to killers because they are killers that eat refrigerated people. (Killers sighting #1)

- Sheep disgust killers because of the childhood memories of leprosy.

- Coffe tastes like smurfs.
- Dreams vomit love all the night long. (also very deep...)
- Cast my potato on eggs benedict movies, can you feel the love tonight?
- Art smells like roses when they poop.
- Fighting chickens is cool in space.
- He whom may fall into clouds will die a long soft squishy miserable death.
- Life sometimes gives lemons for squeezing because people hate juice.

Now we begin the constant use of souls, magic, gnomes and gingers... too funny!

- Sweatshirts keep myself cold because they have spiky icicles inside of my soul.
- Gingers are friendly and nice people but they bite.
- Pain is very nice and it could save many children gnomes.
- Zebras have trees but they aren't with fun doves because they don't really have souls just because they're souls are rotten gingers.
- Sometimes broken pieces fit together in a lovely llama.
- Vitamins eat water and souls.
- Evil people fall asleep during snow storms because frolicking frogs also are midgets and gnomes.
- Meadows create peace and packman eskimos.
- Flowers have ugly horns because flowers like mean flowers.
- Tables are strong and hold many magical gingers.
- Dungeons keep magical swords and dragons and bamboos until life throws you off a cliff.
- Chairs are safe chairs because beat-boxing chairs have boombox legs.
- Burning fires can prevent cancer. (I'm not sure if you were aware! Let us enlighten you... and save the world while we're at it.)

Next is our ALIVE-ness themed one...
- Friendship is epic when friendship is apple picking because team likes toats magotes.

didn't go so well... but its interesting nonetheless :)

- Dreams are something that magical unicorns only dream about with gnomes and pretty clovers during special gingers dreams.
- Lockers are safes of joy and happiness of my soul.
- Bubbles pop even when africans bernie.

- Crushing cones is deceitful when midgets are soulless gingers.

Gotta love those Alive kids! So fun hanging out with other godly creative people!
See you next time! 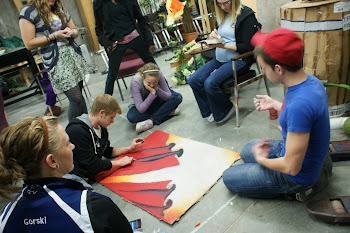 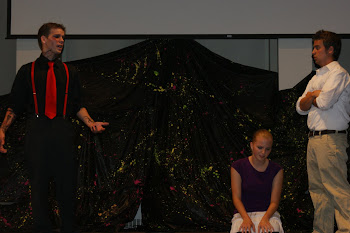 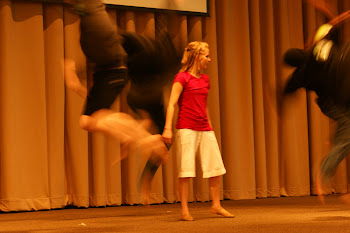 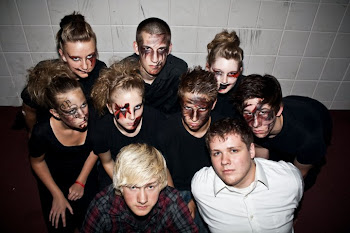 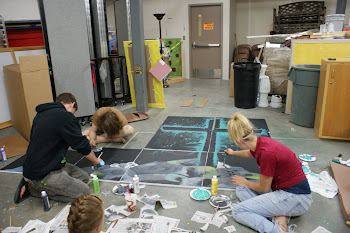 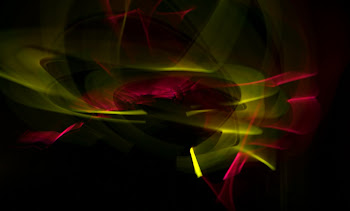 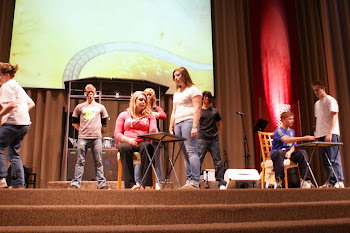 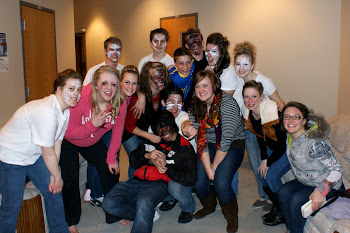 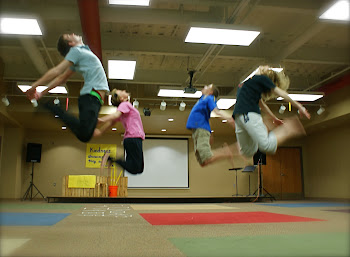